Walker Evans (1903-1975) was undoubtedly one of America’s greatest photographers.  His black-and-white images stand as time capsules of an America now gone but still familiar.  Evans is best known for his iconic images of sharecroppers hit hard by The Great Depression as part of his work for the Farm Security Administration.  During my recent visit to Cooperstown, NY and the Fenimore Art Museum, I was able to see their amazing collection of Walker Evans’ photographs.  I was struck most not by his most famous images from the Dust Bowl and America’s Heartland, but by his images of America’s East Coast during the same time period.  His photographs of people and places spanning the hardened core of America’s original thirteen states from New York City to Atlanta captured an America that was shell-shocked but resilient, an over-developed and industrialized stretch of the Eastern Seaboard that was crumbling and decaying but populated by survivors — an America that would eventually pull through the Great Depression and produce the Greatest Generation defined by their heroic actions in World War Two.

Here are some of my favorite images from Walker Evans: 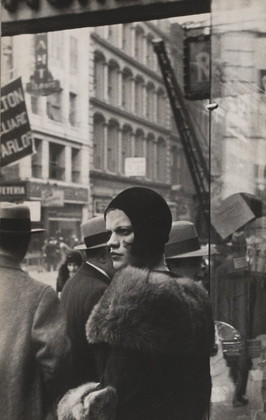 1.  Girl in Fulton Street (NYC, 1929).  I don’t know if this was taken before or after the Crash of ’29, but there is a knowing look painted on this girl’s face…and you can see nervousness beneath the veneer.  Should she be scared to death or just slightly annoyed by the impending doom?

2.  Torn Movie Poster (Unknown, 1930).  The actual photograph is larger, but this close-up strikes at the heart of the composition.  This brilliantly captures the fear and the anxiety felt during the early years of the Great Depression that left many literally tearing at the scraps left over…or as modern rockers Muse might say, “It’s time the fat cats had a heart attack.”  Bonus points to anyone who can identify the film.

3.  Billboards and Houses in Atlanta (Georgia, 1936).  There is so much detail captured here…houses that have probably long since been demolished and movies no one remembers or watches anymore.

4.  Graveyard and Steel Mill in Bethlehem (Pennsylvania, 1935).  This image speaks volumes about an America mourning a crumbling infrastructure.

5.  Sons of American Legion (Bethlehem, PA, 1935).  From left to right, the boys facing out represent a motley crew of characters:  the serious one, the wisecracker, the impatient one, and the slow one.  Less than ten years later they would be marching off to war and would become the Greatest Generation.

6.  Joe’s Auto Graveyard (Pennsylvania, 1936).  This one says it all, doesn’t it?  When that scrap-metal was turned into tanks, America was reborn.

All Photographs by Walker Evans.