Most film bloggers and critics raced against time and each other to get in their “Best Films of the Decade” lists after the clock struck midnight and we were suddenly thrust into Arthur C. Clarke’s…dun dun dun…TWO THOUSAND AND TEN.  With the past decade so fresh on our minds, so many films yet to be seen or uncovered, so many to re-watch and re-examine, and the world-famous polling for this decade not to start until April over at Wonders in the Dark…it seems like there is still so much left to say about the 2000’s, or the Noughties as people like to call them now.

Yet all I can think of is one word.

Looking back, the 2000’s were to my generation what the 1970’s were to my father’s.  It seemed the dawn of a new golden age.  Gone were the nostalgia tinted frames of the 1980’s and 1990’s and here was the first decade to exist completely within the context of my adulthood…under the harsh scrutiny of my ever-evolving critical eye.  This was a decade where film reflected the big ideas, big dreams and previously unimaginable nightmares of the post-millennial, post 9/11 generation.

This was the decade where Christopher Nolan emerged as the new Fritz Lang.  His Memento seems like just that now…a quaint reminder of his past and an entry point into his indomitable imagination that is equally at home in intimate gimmicky independent films as it is in the biggest of blockbusters.  But Lenny’s tattoos represented what would become the collective fears of society in the 2000’s…short-term memory loss, forsaking our identity and not remembering what we’re fighting for.  His breakthrough memory jogger, which looked backwards at an unstoppable and dark forward momentum that would birth Insomnia, The Prestige and the greatest pair of comic book movies ever made (Batman Begins and The Dark Knight) was the perfect way to usher in the new Millennium.

It was also the decade where Ang Lee made me believe, even if just for a moment where I was recalling a dream, that people could fly in Crouching Tiger Hidden Dragon.  Sure, the success of his later Brokeback Mountain may be what most remember him for…but let’s not forget those broken-hearted Chinese warriors dancing across treetops and leaping into a boundless universe where ideas of love and honor fly forever in our collective unconscious.

This was the decade where ’70’s icon Roman Polanski found some kind of redemption by depicting, coldly and with a broken heart, man’s unshakable will to survive…anything…at all costs…in The Pianist.  To this day, I find it to be the most artistic depiction of surviving the Holocaust ever put to film.  Yet in real life, his tortured (and criminal) past still haunts him.

This was the decade where another 70’s mastermind, the visual poet Terrence Malick rediscovered the timeless fluidity of discovery in The New World.  This was a film I wasn’t sure what to make of at first (I was mostly enraptured but also slightly puzzled), but it has evolved upon repeat viewings to be a rousing masterpiece and Malick’s best.

This was the decade where David Lynch took us down the rabbit hole in the middle of Mulholland Drive and made me fall in love with Naomi Watts, who with lead roles in films like The Ring, 21 Grams, King Kong and The Painted Veil would emerge as the definitive actress of these dark and troubling times. 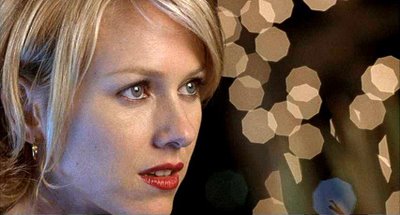 And most astoundingly in 2007, it was Paul Thomas Anderson who flung me into that deep well of my nightmares, that seemingly bottomless black pit, along with the spontaneously combusting performance of Daniel Day Lewis in the decade’s greatest film…There Will Be Blood.

I am extremely confident in this choice.  My love for TWBB has become second nature.  Were I to suffer from dementia…or someone hold a gun to my head…or my body be lying on my death bead…and someone were to ask me, “What are your favorite films of all time?”  I would respond without a second thought:

The Passion of Joan of Arc

There Will Be Blood

It’s the epitome of “unforgettable” — no tattoos will be needed to remind me of its greatness.  And let’s face it, even if you don’t like it, that prophetically chilling title…

…it’s among the greatest titles ever and says everything you need to know about the Noughties.

And now here it is, unabridged, (and with a few SPOILERS, so be warned) exactly as it appeared just over two years ago on this very blog and the IMDB…my original ‘Spin on Paul Thomas Anderson’s masterpiece There Will Be Blood:

The World of Blood and Oil According to Plainview, 6 January 2008

There’s a recurring nightmare of mine where I am falling down a well. Our reality is an illusion. This life is simply the dream we have while we are actually falling down a well. It always seemed as if the well was bottomless. After watching There Will Be Blood I discovered the well has a bottom. At the bottom of the well is one thing. Oil.

Also falling down this well was “The Performance.” Watching Daniel Day Lewis play the unstoppable, unshakable, unfathomably misanthropic and greedy oil man that is Daniel Plainview, one is left to imagine that “The Performance” was always out there. It always existed somewhere in the ether, in our collective unconscious, in our nightmares and anxieties. It took a visionary auteur like Paul Thomas Anderson to realize that if he did a modern film update of Upton Sinclair’s early 20th century novel “Oil!” and ominously renamed it There Will Be Blood then this performance could be channeled onto celluloid as a testament to the defining struggles of 21st century mankind.

Blistering cinematography of stark California landscapes from Robert Elswit, an evocatively organic and haunting music score from Jonny Greenwood (from the rock band Radiohead), and the beautifully fluid movement and framing of Paul Thomas Anderson’s maniacally calculating camera grab you from scene one and never let go. Daniel Day Lewis moves through the film like a cold burning firestorm combining and combusting with the technical elements and the fabulous ensemble cast around him to create a rising tension that is unlike anything experienced in cinema since the golden era of Stanley Kubrick.

The story is multilayered and allegorical. Led to an untapped area floating in dust on rivers of oil by a mysterious young man, Plainview soon comes face to face with that young man’s twin brother, Eli Sunday (a fecklessly manipulative Paul Dano). Eli is a wunderkind preacher at the Church of the Third Revelation and has the town wrapped around his finger with his claims to be a healer and prophet. Eli agrees to let Plainview buy his family’s land for the right price. The profits are to be used to build a bigger church. But when Plainview refuses to let Eli properly bless the drill site, a series of events unfold that Eli trumpets as acts of “God” while Plainview views them as results of meddling people he can scarcely see any good in and must crush.

The heart of the movie lies in Plainview’s relationship with his adopted son H. W. (a wonderfully naturalistic and quietly expressive Dillon Freasier). When the boy is injured on a drilling site and loses his hearing, Plainview, torn by his love for the idea of the boy looking up to him and the friendly face the boy has leant to the family business, abandons him only to latch on to a shady vagabond (Kevin J. O’Connor) who trots into town claiming to be his long lost brother Henry. Plainview’s replacing of a fake son with a fake brother shows his character’s deep-seeded and wounded need to connect to someone when insatiable greed has been his only driving force.

To explore in detail the film’s deeper message and resonance for today’s audience would be to spoil the ending. Suffice it to say, after the slowly infectious, nerve-shattering build-up, the film culminates with a soliloquy from Plainview to Eli that will make your jaw drop. In the end, it lives up to its title. There was blood. Whose was spilled is not a matter of debate, but what that blood says to its 21st century audience will be discussed and argued and studied for years to come. If you want to know what happens when greed guised in religious zealotry falls down a dark seemingly bottomless well with greed blatant as corporate capitalism, look no further than this film. There is a bottom to that well. There is a winner at the finish line. Meanwhile the blood is on the floor, the walls, the desert sand, the silver screen, the nightly news, and pumping through our bodies until we die.

And now, David H. Schleicher presents his Top 25 Films of the 2000’s, followed by a chronological list of honorable mentions:

Check out my past lists:

Revisiting The Sweet Hereafter – The Best Film of the 1990’s

Click here or on the sidebar for the archive of all My Favorite Films from the 1920’s to today.