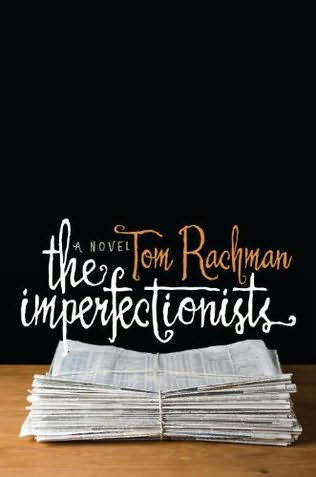 Tom Rachman’s debut novel, The Imperfectionists, reads like a collection of short stories, each one focusing on a different character swirling around in the soon to be ashes of an international English-language newspaper based in Rome.  At the end of each episode, Rachman reports in brief serialized fashion on the origins of the paper, a noble but doomed-to-fail experiment, and its different near-deaths over the years before instant-globalization and access to news through the internet put the final nail in its coffin.  What he achieves is a series of love songs (some better composed than others) serenading a dead media: the newspaper…romantic, archaic, quaint…obsolete.

In a bit of irony, the opening chapter taking place in Paris detailing the quietly crumbling marriage of an aging and ineffective foreign correspondent named Lloyd Burko is the novel’s most compelling.  How Rachman is able to capture the internal thoughts and feelings of an aging man entering the twilight of his career and life is a nifty little piece of subterfuge.  Perhaps it’s the portrait of an old man only a young man could write, but Lloyd and his foibles are the most fully realized aspects of the book.  And it’s fitting he doesn’t step into the background of any of the subsequent Rome-based stories.  Only in the final “everything-tied-up-neatly-in-a-bow” epilogue do we learn of Lloyd’s fate.

The subsequent episodes are hit-and-miss.  The second chapter focusing on obituary writer Arthur Gopal (the only happily married character in the novel) packs an emotional wallop (in sharp contrast to the contemplative and subtle emotions engendered by Lloyd Burko’s tale) and is a hard one to shake.  Subsequently engaging and clever episodes (one taking place in Cairo and another focusing on one of the paper’s most faithful Italian readers) are the highlights amidst a series of sad-sack, dryly humorous, and somewhat tiresome tales featuring one too many interchangeable career women longing for romance or unhappily married men looking for better careers.  All of these characters play minor roles in each other’s lives, and Rachman occasionally seems too busy trying to find ways to connect everyone.  The fact they all worked for the paper was enough for me.

In a final twist of fate at the end, we learn that the paper may have been started as a failed attempt to romance a woman.  The fact that the paper never had any greater ambitions (despite the great ambitions of some of its editors and reporters) speaks to its not-surprising demise some fifty-plus years later.

The Imperfectionists is a curious read…a clever, entertaining and mostly breezy affair loaded with nice little observations about the misguided actions of people thinking they were working towards something greater than it was ever meant to be, but there are no stand-out “WOW!” moments or passages.  The characters are for the most part endearing despite being loaded with neurotic quirks and poor senses of judgment…but none (spare for maybe Lloyd) are particularly memorable, and their interchangeable natures allow them to blow away in the wind of the reader’s mind.

But maybe that’s the point Rachman is trying to make.  What these characters viewed as important maybe really wasn’t.  This paper (maybe all newspapers) was always doomed…meant to be fleeting no matter what false senses of ambition or cultural significance were tied to it by the people who loved to either be in print, control the print, or get the print all over their hands.

Publishers, editors, reporters, writers and readers alike should resign themselves to the fact that the newspaper as it once was will never be again.  We are in a new media age, and in another fifty years the romance and old-world intrigue of printed news might be completely forgotten.  In that context, The Imperfectionists is both a time-capsule and eulogy.