“In Italy for 30 years under the Borgias they had warfare, terror, murder, and bloodshed, but they produced Michelangelo, Leonardo da Vinci, and the Renaissance. In Switzerland they had brotherly love – they had 500 years of democracy and peace, and what did that produce? The cuckoo clock. “

More so than any other decade in the brief history of film, the 1940’s showed that with great tribulation came great inspiration.

Behold the following cinematic masterpieces created amidst a world at war:  Casablanca, Citizen Kane, The Grapes of Wrath, Bicycle Thieves, Double Indemnity, Shadow of a Doubt.

In any given year in any given decade any one of these films could easily top anyone’s list.  Some of them are routinely bantered about as the greatest film of all time.

And then there is…THE GREATEST FILM OF ALL TIME.

If the 2000’s were emblematic of my generation, and the 1970’s belonged to the generation of my parents…then the 1940’s were where my grandparents’ generation left their indelible mark:  the decade of the Greatest Generation that clawed their way out of the Great Depression to rise triumphant out of the calamity of World War II.  Film mirrored this struggle with tales that showed the human condition is made up of trouble every day.  We saw some of the greatest book to film adaptations ever with David Lean’s Oliver Twist and John Ford’s The Grapes of Wrath.  Speaking of wrath, Carl Theodor Dreyer delivered his bewitching Day of Wrath, while Hitchcock produced the film closest to his heart and mine, Shadow of a Doubt.  Clouzot was going tete-a-tete with Hitch across the pond in his native France with the allegorical Le Corbeau and the wildly entertaining police procedural Quai des Orfevres while the Italians were rising from the ashes with their neo-realism movement marked by De Sica’s Bicycle Thieves and Rossellini’s Rome Open City.

And beyond briefly mentioning, I haven’t even touched on Casablanca and Citizen Kane, two films deserving of their own full write-ups and tributes.   Yet even those films don’t hold a candle to Carol Reed’s descent into GreeneLand and ascent into film history. 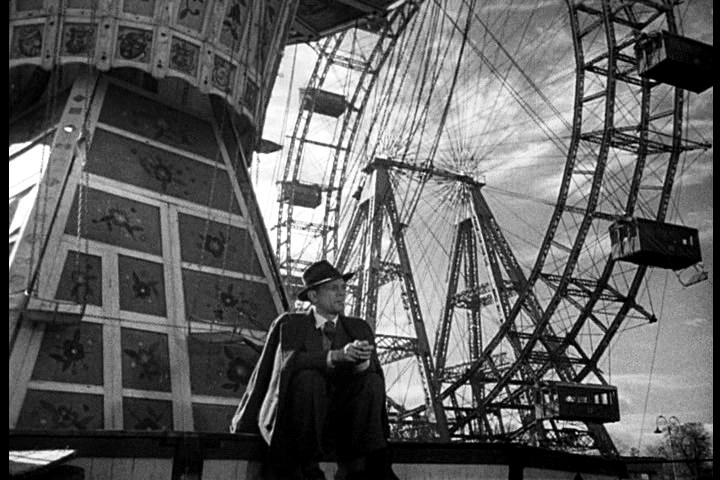 “You were born to be murdered.”

In preparation for this retrospective on arguably the greatest decade for film, I re-watched The Third Man, and I have come to the conclusion that it is the greatest film ever made.  Like the greatest of its screenwriter Graham Greene’s novels, it bridges that chasm between art and entertainment, between style and substance, between character and plot, story and structure.  And it’s perfect.  Larger than that, it marks the pinnacle of one of filmdom’s most popular movements – Film Noir, which began in the 1930’s and would continue into the 1950’s, but reached its peak here in 1949 when Carol Reed took crooked angles, shadows and light, cobblestone streets and smoke and along with cinematographer Robert Krasker delivered shot after shot after shot that could stand alone against the greatest black-and-white photography ever captured.  Beyond that, the film bridged the gap between the strung-out double-crossings of the post WWII-ravaged landscape and the Cold War Era paranoia that would define the films of the 1950’s.

“I’m just a hack writer who drinks too much and falls in love with girls.”

The Third Man is a film that could never be remade.  It exists alone, perfectly in a pocket of time.  Never again will there be that perfect storm of trouble between the end of WWII and the start of the Cold War.  Never again will there be a writer like Graham Greene.  Never again will there be a director like Carol Reed who was able to coalesce into one all of the elements that make a film so memorable and unique…a foursome of unforgettable lead characters, performances of a life-time, music and sound and imagery and a setting (Vienna, cracked into four) that could never be recreated.  From the opening montage painting that picture of Vienna’s black-markets (containing one of the most haunting voice-over shots in film – where the narrator remarks that such nefarious activities unfortunately tempt amateurs while we see a body floating face-down in shallow water amidst a bombed-out cityscape) to the anti-romantic closing shot of Alida Valli (the ultimate anti-femme fatale) walking past Joseph Cotten, who lights a cigarette as she passes, the last leaves falling off naked trees – The Third Man is completely exhilarating.

It’s a labyrinthine mystery.  It’s a rip-snorting thriller.  It’s a wicked black comedy.  It’s noir at its best.  It’s film as it should be – entertaining and artistic.  It’s full of endlessly quotable dialogue, haunting performances, snappy writing, brilliant direction and a music score like no other.

It’s hard to believe it’s only been a little over three years since I first saw The Third Man.  I feel like we’ve become the oldest and best of friends.  Though I may have reiterated much of what first came to mind above, here is my original review, unabridged, as originally published here at The Spin on the IMDB:

The Trouble with Harry Lime

I initially felt a fool for not having seen The Third Man earlier. However, in retrospect, having now read most of Graham Greene’s major works, and having received some keen insight into the back-story of producer Alexander Korda through Kati Marton’s book The Great Escape, I feel I was able to enjoy The Third Man even more for the staggering masterpiece that it is.

As a European/American co-production bankrolled by two legendary hands-on producers, David O. Selznick and Alexander Korda, The Third Man was masterfully crafted by director Carol Reed from a screenplay by British novelist Graham Greene. The film served as a pinnacle of the film noir movement and is a prime example of master filmmakers working with an iconic writer and utilizing an amazing cast and crew to create a masterwork representing professionals across the field operating at the top of their game.

Fans of Greene’s novels need not be disappointed as the screenplay crackles with all that signature cynicism and sharp witted dialogue. Carol Reed’s crooked camera angles, moody use of shadowing and external locations (Vienna, partially bombed out, wet and Gothic, never looked more looming and haunting) and crisp editing are the perfect visual realizations of Greene’s provocative wordplay and often saturnine view of the world. Reed’s brief opening montage and voice-over introducing us to the black market in Vienna is also shockingly modern, as it is that energetic quick-cut editing that has influenced directors like Scorsese to film entire motion pictures in just such a style. Also making the film decidedly timeless is the zither music score of Anton Karas, a bizarre accompaniment to the dark story that serves as a brilliant contradiction to what is being seen on screen.

The story of The Third Man slides along like smooth gin down the back of one’s throat as characters, plot and mood meander and brood along cobblestone streets and slither down dark alleys in an intoxicated state. Heavy drinking hack writer Holly Martins (Joseph Cotten, doing an excellent Americanized riff on Graham Greene himself) arrives in post WWII occupied Vienna to meet up with his old pal Harry Lime (Orson Welles) only to find that Lime is reportedly dead, the police (headed by a perfectly cold Trevor Howard) don’t seem to care, and Lime’s charming broken-hearted mistress (Alida Valli, perfect as another Greene archetype) has been left behind. Of course, Martins can’t leave well enough alone as conspiracy, murder, unrequited romance, and political intrigue ensue. Welles benefits greatly from being talked about for most of the film and appearing mostly in shadows spare for two scenes: the famous ferris wheel speech, and a climatic chase beneath the streets of Vienna through Gothic sewers. His top hap, dark suit, and crooked smile are the stuff of film legend.

The side characters, however, are what make The Third Man such a rich, rewarding experience. We’re treated to small glimpses into the mindsets of varying people ranging from a British officer obsessed with American Western dime-store novels (of which Martins claims his fame) to an Austrian landlady eternally wrapped in a quilt going on and on in her foreign tongue as international police constantly raid her building and harass her tenants. The brilliance is that one needs no subtitles to understand her frustration. These added layers of character and thoughtful detail, hallmarks of Greene, set The Third Man in a class above the rest of film noir from the late 1940′s era.

Make no mistake, The Third Man is arguably one of the most finely crafted films ever made. One’s preference towards noir and Greene’s world-view will shape how much one actually enjoys the film. For the sheer fact it has held up so well over the decades and has clearly influenced so many great films that came after it, its repeated rankings as one of the greatest motion pictures ever made can not be denied. With a good stiff drink in hand, and Graham Greene’s collection dog-eared on my bookshelf, The Third Man is undoubtedly now one of my favorite films. Reed’s closing shot of a tree-lined street along a cemetery and Joseph Cotten leaning against a car smoking a cigarette while Alida Valli walks right past him with that zither music score playing is one that has left an indelible mark on my memory and enriched my love of film as art. 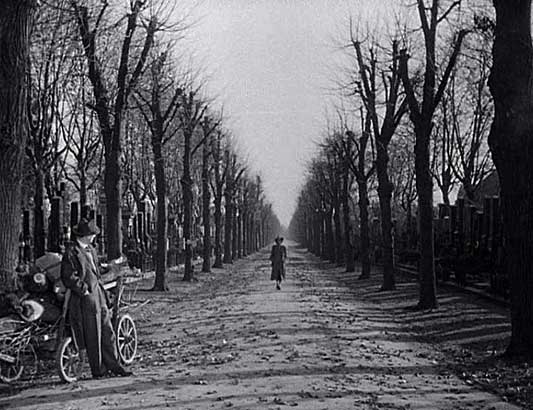 Check out The Spin’s previous retrospectives:

And of course, here is my My Favorite Films Archive.

What are your favorite films from the 1940′s?  Start the debate in the comment form.