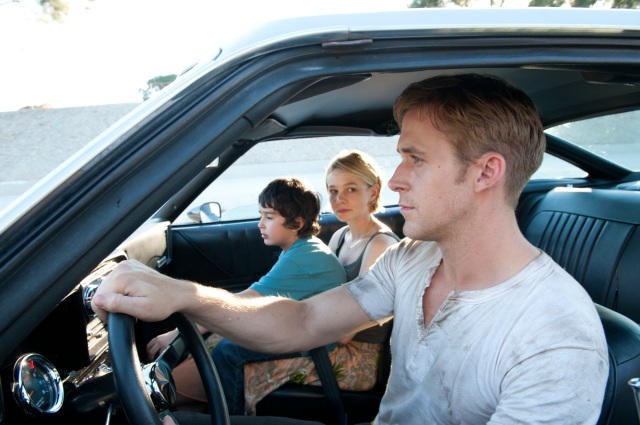 What are you going to do?

Hey, Ryan Gosling!  Here’s the scoop, friend.  You’re a low-rent stunt driver for Hollywood.  When not flipping over cars, you’re working in a body shop for that old guy (Bryan Cranston) who’s helped you out like you were his own son.  You moonlight for criminals (giving them five minutes and five minutes only) driving getaway cars under strict rules that keep your record clean.
In step some shady characters looking to invest in drag racing.  There’s the Jewish Pizza shop guy (Ron Perlman – thuggishly good) and Mr. Money Bags (Albert Brooks – slow to menace).  Hey, slow down, here’s the deal.  The old guy builds and sells them a custom car – and, that’s right – you just might get to be the driver.  This might be your ticket out!
But then you meet a swell gal (Carey Mulligan – cute as a button and donning a hairstyle that would fit Naomi Watts circa Mulholland Drive) who turns out to be your neighbor, a waitress, and single mom to a neat kid (Kaden Leos) who knows a bad guy when he sees ’em.  Turns out her hubbie (Oscar Isaac) is in jail.  Just as she’s gettin’ all sweet on ya, he gets out.  But guess what?  He’s actually a nice guy just hard on his luck.  You wanna be his friend – for her – for the kid’s sake.
Your new friend has some bad guys after him – looking to shake him down for protection they gave him while in the slammer.  They beat him up.  They threaten his wife and kid – the wife and kid you want to take care of no matter what.  Seems like all he has to do is rob a pawn shop and they’ll leave him alone forever once the money is in their hands.  You agree to drive the getaway car.  Ah – here’s a wrench in the plan for ya – along for the ride is Trouble with a capital T in the form of Something Sexy played by Christina Hendricks (who fills out full-bodied white-trash trouble with the same figure she uses to fill 1960’s hubba-hubba secretaries’ skirts on TV’s Mad Men).
Suffice it say – shit goes down.  It was a set-up.  You’re on the hook.  You got a million bucks in your trunk.  People are dead.  And you got bad dudes after you, man.  Your sweet gal and her little boy are just as much a target as you.
What are you going to do?
Drive is full-throttle neo-noir to the core.  The screenplay from Hossein Amini (adapted from the book by James Sallis) is highlighted by sparse dialogue (with a few well placed great lines) and existential character moods.  The film is propelled by the excellent work of composer Cliff Martinez (hitting his stride coming off of Contagion) who applies a minimalist approach that acts like the tick-tock of a clock, heightening tension when needed, and then lifting the mood with carefully placed new-wave pop-rock songs with techno beats.
Director Nicolas Winding Refn (previously unheard of on American shores) isn’t afraid of long silences, building momentum and juxtaposing the lovely with the profane (witness a death by shower rod – or better yet – that head crunching violence following a transcendental first kiss in the soon to be famous elevator scene).  He’s out to shock you – symbolically.  And he amps up the violence as much as he winds it down – ending the film in a brutal scene transmuted almost completely through shadows on a black top.
Refn borrows liberally from the works of Michael Mann, Martin Scorsese, Fritz Lang and David Lynch – most notably presenting a view of Los Angeles that is like some mystical futuristic view of a metropolis dreamed-up by some lonesome renegade cowboys lost in the desert on the run from the law.  At times, Drive is as much a Western as it is a Noir.  But he whips it up into a style all his own.
Ultimately, like Lynch’s Mulholland Drive – this is a love story in the city of dreams where everyone plays their part.  At one point, Gosling dons a mask he wore as a stunt driver to take out one very bad dude in what is possibly the most chilling scene ever filmed on a California beach.  But it’s just one role of many for this actor.
Refn seems to be telling us that only a select few get to play the hero.  Some actors, like the nameless schlub who got his head smashed to bits in an elevator, were born to remain nameless and have their heads smashed to bits in an elevator. Some actors, like Cranston or Hendricks, might reign supreme on television but were born to play character bits on film.  Some actors, like Albert Brooks, try to reinvent themselves by scaring the shit out of us.  Some actors, like Gosling and Mulligan, are destined for super-stardom.  What role will you play?
Well, you gotta have the guts to take a Drive every now and then to find out.
Written by David H. Schleicher
________________________________________________________________
Since its release, Drive has been all the buzz on the blogosphere and has become compulsory viewing for any film buff worth their salt.  Here’s the spin on some of the best lurking out there:

What did you think of the film?