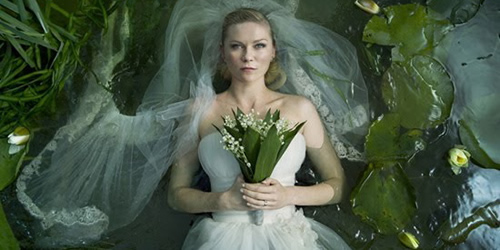 Lars Von Trier’s epic ode to depression and the end of the world – perhaps one and the same – opens with Richard Wagner’s Prelude to Tristan and Isolde playing over a series of breathtaking, beautiful and perfectly composed shots that at first appear to be stills until you realize they are moving in ultra slow motion.  With the hauntingly operatic music full of swooning lilts and gasping rises into the stratosphere, Von Trier symbolically (and in some shots literally) transmits what we are about to experience.  The slow motion represents the trudging through emotions while the music elicits thoughts of a great tragedy about to befall us all.  And then boom! – he lays all of his cards right on the table as we watch in simultaneous horror and joy as two worlds collide.  It’s an eerily quiet yet emotionally bombastic counter action to Terence Malick’s creation of the universe sequence in The Tree of Life.  Both films, operating at opposite poles and giving us glimpses into the vast outward expanse of human imagination through the precipitous downward spiral into the mind and madness of one, are miraculous masterpieces.

*READ WITH CAUTION – SPOILERS AHEAD!*

Following his audacious prologue, Von Trier cuts his film into two parts representing two sisters – Justine (Kirsten Dunst, a revelation) and Claire (Charlotte Gainsbourg, regaining the dignity here that she lost in Von Trier’s abominable Antichrist).  The first half details the lavish wedding reception of Justine, a woman of immense charms and success who appears to be smiling at the top of the world.  Von Trier wisely infuses bits of humor and pop-culture movie aesthetic when we first meet Justine.  Soon, though, he’s commenting on the past works of other great Danes (Vinterberg’s The Celebration is recalled) as we come to realize this wedding party is catered by a highly dysfunctional family, and creeping up underneath Justine’s facade is a great depression capable of drowning everyone. 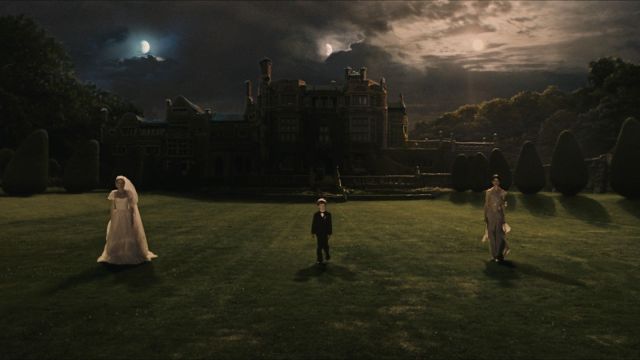 For Justine, her marriage to Michael (a likable and sympathetic Alexander Skarsgard) is the equivalent of the end of the world.  She imagines only the worst, and those who are supposed to love her know it best.  Slowly her family picks away at her – Claire is resentful of her flightiness and tardiness, Claire’s husband (Kiefer Sutherland, excellent) is bitter that he forked out the cash for this wedding fit for royalty only to have Justine ruin it with what he views as a selfish indifference, her mother (Charlotte Rampling, in what may be the coldest depiction of a woman who is stark raving mad I have ever seen) is bitter and doesn’t hold back her feelings in front of the guests about what a mockery she thinks this all is, and the perfectionist wedding planner (Udo Kier in a sardonic cameo where he spends most of his time hidden behind his hand) literally can’t bear to look at Justine after she ruins “his wedding” with her juvenile theatrics.  Only her sweet nephew Leo (Cameron Spurr), who wants to play and build caves with her, and her eccentric father (John Hurt), who calls every woman Betty, show her any bit of kindness – but perhaps it is because they are both oblivious to her inner turmoil.  All of them want to know why Justine can’t just be happy…or at the very least, why can’t she just act like she is and smile for everyone?

Justine is a woman who appears to have it all, but over the course of the evening, she loses everything.  Kirsten Dunst pulls off Justine’s disintegration with a performance that is so nuanced and textured (you can feel the ironic bitterness in the tone of her voice when she tells off her boss played by Stellan Skarsgaard) that not even the actress’ most ardent sympathizers (myself included) would’ve ever imagined she was capabale of this.  It’s not only the best acting performance of the year (thus far) but possibly the single greatest performance by an actress in the last ten years.

Von Trier then abruptly moves onto the second half where Claire is literally facing down the end of the world.  A planet called Melancholia, that had been hiding behind the sun, is hurling past the inner planets heading for a “drive by” of earth.  As silly as the idea sounds, Von Trier does a good job of making it appear somewhat plausible, and he treats it all with such sincere self-seriousness under the gauze of an eerily pleasing gloom that one can’t help but be enthralled by the predicament.  Claire, always the sensible and stable sister, is suddenly at wit’s end as her scientist husband welcomes the “drive by” as the experience of a lifetime, her inquisitive little boy is equal parts scared and excited, and her sister has just arrived fresh from a monumental emotional breakdown.  Though it is here where we see Claire fall apart, it is again Justine’s depression that seems to be dragging everyone down with it, as if it has grown so large that it is the planet Melancholia dragging itself into the earth’s gravitational pull so that it might annihilate our very existence. 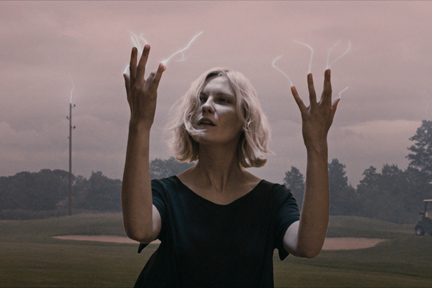 What transpires next is positively electrifying and represents a seismic shift for Von Trier the likes of which one could not imagine after his downward spiral from the psychotic minimalism of Dogville and Manderlay into the sickening overly-stylistic descent into personal hell and madness that was his Antichrist.  Throughout his career, Von Trier has derived great pleasure from depicting the nerve-shattering existential quandary post-feminist women face in a still fiercely patriarchal world that for the director always manifested itself through violence (in Madea and Dogville), martyrdom (in Breaking the Waves and Dancer in the Dark) and self-destruction (in Antichrist).  Lately (and especially in Antichrist) he appeared to be annihilating this archetype as he had grown to (or maybe always did) loathe it.  Perhaps during his crippling bouts of childhood depression his mother was not there to comfort him, and thus through his films he always battled those conflicted feelings of love and hate and sought to uplift her and then murder her.

We hear echoes of this when Justine calmly tells Claire things like, “Life on this earth is evil…We are alone…Life is only on earth and not for long.”  It’s as if Von Trier is speaking through her.  At one point, Claire breaks down and expresses her wish to Justine that the family, when the time comes, go sit on the  terrace together…with some wine…some music (Perhaps Beethoven’s 9th? Justine sarcastically suggests)…and find solace in each other and the beauty of the world before it all ended.  But Justine sees things as they are, and she thinks she knows things.  She always expects the worst – whether it’s the wedding symbolically representing the end of her or the actual end of the world her once sane sister can’t handle.  To Justine, Claire’s request is sick.  “I think it’s a piece of shit,” she tells her.

And you think that’s how the film will end.  That’s how Von Trier wants it.  He wants these women to hate each other and die alone and bitter.

*IF YOU ARE STILL READING AND DON’T WANT THE ENDING OF THE FILM SPOILED – STOP HERE!*

But behold…there’s been an evolution in Von Trier’s expression of his innermost desires through film, and Justine is not just another incarnation of his favorite archetype – she is his most complex and alluring character ever conjured.  After rebuking Claire, Justine gravitates towards her innocent nephew Leo who is now scared to death of the impending doom.  His father told him if Melancholia got this close, nothing could be done.  But in one final act of unexpected kindness, Justine is willing to put on a front and pretend like she doesn’t believe that which she knows is true.  She tells the boy she can build a magic cave where they will be safe – and the two of them go about building it out of huge sticks.  And Justine, Claire and Leo all sit in there, holding hands, pretending that everything will be alright…and we know from those opening shots…that it will not.

The best escape is to pretend, and Von Trier (the auteur), Justine (the archetype) and Kirsten Dunst (the actress) form a cinematic trinity which knows this all too well.  In this regard, the film becomes the ultimate modernized Grimm’s Fairy Tale – a transfixing story parents can tell their children to help calm the dark passengers in their minds.  But it also represents a return to simpler times…a return to innocence…perhaps the innocence lost in Malick’s The Tree of Life?  The cinematic gods have brought us full circle.  In the end, Justine finally took her sister’s advice, and she chose to be happy…and then the world ends…and that, my friends, is Melancholia.

It is beautiful, and it is Von Trier’s greatest achievement.

16 comments on “Melancholia, Marriage and the End of the World”