Film within a Film in Seven Psychopaths and Argo

Currently in cinemas across the nation two films take on the old “film within a film” schtick – one going absurd while the other playing it straight.  Both have garnered critical acclaim but only one has seen box office success and is being bandied about with awards buzz.  Seven Psychopaths and Argo couldn’t be more different in style, substance and intent – yet they both hang (and in one case, hang themself) on the central conceit of a film within a film. 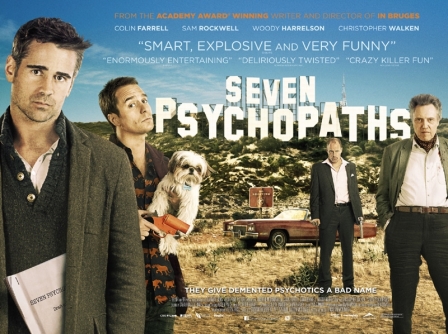 First up is Seven Psychopaths.  Boring title and lousy marketing aside, I had high hopes for award-winning playwright Martin McDonagh’s second feature film as his first, In Bruges, is one of my favorite films from the past five years.  The plot of Seven Psychopaths sounded darkly madcap enough – a hapless bunch of dog thieves (Christopher Walken and Sam Rockwell) kidnap the dog of a gangster (Woody Harrelson) and hilarious melee ensues.  Sadly, what might have made a good short-story is trapped amongst other not-so-good stories as one of the friends of these dog-nappers is a struggling, alcoholic writer (Colin Farrell) working on a terrible screenplay called Seven Psychopaths that he intends to use to eschew the typical psychopathic thriller.  We get introduced to these psychopaths as he makes them up and some are more interesting than the rest, though as Walken’s character puts it so succinctly at one point, “It all gets a little tiresome after a while.”

Despite some scathing pieces of darkly comic dialogue (a McDonagh hallmark), a few over-the-top bits and a cast making the most of the absurd meta-narrative…Seven Psychopaths goes nowhere.  There’s no character to care about (even in the world of the film I wasn’t sure which one was real or not) and the drunk, struggling writer bit has been done to death…as has this particular brand of violent comedy.  In Bruges had endearing characters, tons of heart and a uniquely beautiful locale to go with the obscenity laced dialogue, cruel observational humor, philosophical pondering and “fairy-tale” violence.  Seven Psychopaths, on the other hand, takes place in Hollywood and has no soul. This makes it a major chore to sit through, though apparently some people liked it.

Argo, on the hand, is a movie a lot of people like…really, really like.  And it’s one of those workmanlike based-on-a-true-story thrillers that’s hard to find fault with, though I don’t know if it’s exactly a “standing ovation” type of film.  Argo refers to a fabricated 1980 Star Wars rip-off that the US government sanctioned the CIA and Hollywood to pretend to make as a cover for extracting six US embassy workers hiding in the Canadian ambassador’s house in Tehran during the Iran hostage crisis.  It’s one of those “truth is crazier than fiction” stories, and director and star Ben Affleck (when not appearing emotionless and wooden on-screen in the lead role) does a nice job of recreating with authentic period detail and plenty of playful jabs at both Hollywood and Washington.

Like Apollo 13 and Quiz Show before it, there’s really not much suspense here in a story whose recent history is well-documented, but Affleck creates an intense climax centering on the fake film crew getting out of Tehran by way of a Swiss plane reliant on some perfectly timed phone calls.  Also like those previous two films, it’s an admirable and well-made project…but is it really THAT good?  I don’t know.

You could say that about a lot of what Hollywood puts out these days, and that one straight line in Argo was funnier than any of that over-cooked meta-mess from Seven Psychopaths.