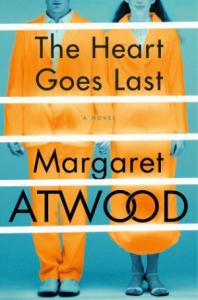 I can’t help but express my disappointment for Margaret Atwood’s latest dystopian novel, The Heart Goes Last.  I was so excited when NetGalley sent me an advance Kindle copy as I was a huge fan of the MaddAddam Trilogy.  But I’m sad to report that Atwood, the sly mistress of speculative fiction, finally seems to be running on fumes.

The Heart Goes Last begins promisingly enough.  In the (not so distant?) future, a young couple, Charmaine and Stan, is living out of their car while the world around them has gone to hell after a financial collapse decimates most of the East Coast of the US turning it into one giant version of Camden, NJ.  But then the once hopeless couple sees a way out when they hear about The Positron Project in the planned community of Consilience.  Here, well-mannered prisoners mix with the desperate destitute (but otherwise law-abiding) masses who can’t find work.  The inhabitants take turns living in a planned community and a low-security prison, swapping time, houses and lives as they carry out tasks for the corporation that runs Consilience.

Atwood creates a golden opportunity to explore the slippery slope of our current privatization of prisons, but sadly the novel glosses over that as things devolve into the absurd and Charmaine and Stan’s tale becomes a silly sex farce (not too far removed from Woody Allen’s cringe worthy Sleeper) jam-packed with CEO’s gone mad, corporate conspiracies, wife swapping, sex bots (who in grand Atwood wordplay are branded Possibilibots), and Neuropimps  who erase all of your past hang-ups so they can imprint your sex drive onto anyone (who pays for it) or anything (there is a darkly humorous side bit where one minor character imprints onto a teddy bear).

The result is an occasionally amusing, but ultimately distancing mess.  It was a slog to get through and I had to wonder, who edited this?  The novel is meant to take place in the US in a not-far-off future, yet the Canadian Atwood has her characters slinging British-sounding slang.  Although she has always been more appreciated for her ideas and clever branding of future products over her dialogue, the dialogue here is distractingly bad.  There are many things in the book like this that make little sense.  Take for instance the obsession with escorts and sex bots looking like Marilyn Monroe or Elvis.  It’s as if this vision of the future was originally conceived in the 1960’s (and it’s meant to be a futuristic 1990’s).  It indicates Atwood is out of touch with current pop culture – as wouldn’t elderly horn-dogs of the future lust after those they crush on in their youth/today (the Taylor Swifts…the…I dunno…Justin Timberlakes?  I’m probably equally out of touch!)?  The cover art folks also did a lazy job as the woman on the cover (clearly meant to be Charmaine) appears with dark hair even through Atwood clearly describes the character as a blonde.  Like, I mean, did anyone other than Atwood, read this thing before prepping it for consumption?

Ultimately the novel reads like something that should’ve been left to the slush pile.  One can’t fault Atwood completely (there are some interesting concepts and satirically funny bits gestating in this cesspool that had she more time might’ve blossomed into something more closely resembling her past brilliance)…but perhaps those circling around her should start challenging her to bring out only her best, instead of just publishing any old thing knowing they’re gonna make their buck.