This is a Land of Wolves Now in Sicario 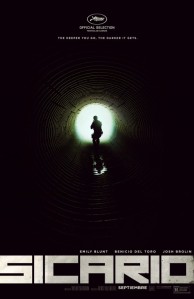 Alejandro is man of mysterious motives and origins who with the aid of another “DOD consultant” – an eager and smiley Josh Brolin – is determined to ruffle some feathers of a cartel based in Juarez that’s been wreaking havoc as far north as Phoenix, where kidnap retrieval field agent Kate (a tense Emily Blunt) has been recently recruited for these clandestine missions after uncovering a cartel body-dump on her home turf.  Meanwhile on the other side of the border, mild-mannered and weary cop Silvio (Maximiliano Hernandez) tries to balance playing football with his adoring son with the unfortunate mechanics of working for the cartel from hell.

Though directed with a psychoanalyst eye by the notoriously cold Villeneuve, his interpretation of Taylor Sheridan’s taut screenplay surprisingly humanizes both sides of the drug war – with a keen awareness of the innocent bystanders as witnessed in the film’s chilling but mundane closing moments in Juarez (whose details will not be revealed here).  Those well versed in Villeneuve’s increasingly impressive oeuvre (especially those who suffered through the torturous though still artful Incendies) won’t be surprised when Alejandro’s motives are revealed, nor in his calculated and merciless actions.  But this meta-knowledge of the artist behind the entertainment doesn’t stop Sicario from being a white-knuckle reality-based creep-out think-piece, made all the more important as it fictionalizes current perils.  And Alejandro sums it up well to Kate when he tells her, “this is a land of wolves now” – a land he helped create and populate.

With Deakin’s cinematography setting new standards for menacing sunsets, aerial shots that make Mexico’s landscape look like an alien world riddled with danger, and night-vision raids…while Johann Johannsson’s pulse-pounding score sticks in your throat…Villeneuve is once again (as has become his calling card) able to ratchet up the suspense and let his actors strut their stuff.  The film is bleak, yes, but also not to be missed for these fantastically orchestrated set-pieces where every element comes together in an artful irresolution meant to mirror the real world where the brutal drug war wages on with no end in sight.