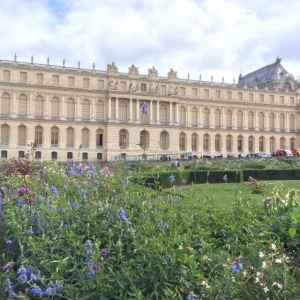 Our epic French adventure ended with an overnight stay in Versailles before flying back to the States.

Versailles is everything you dream and fear it could be (it’s as crowded with tourists as the Louvre), but the grounds are so expansive, if you take the right turns you’ll find yourself in quiet gardens and pathways.  Even lovelier than the grand chateau was Marie Antoinette’s Petite Trianon and Estate – a country oasis still full of grape vines and livestock living an idyllic existence away from the hustle and bustle of the main palace.  It actually makes you feel a bit sorry for the famously beheaded queen – as its rustic design and graceful grasps at tranquility render it clear that poor Marie was in way over her head and simply wanted to escape the madness of the royal court.  It makes for a beautiful walk (the hidden grotto is especially hidden) that was a perfect way to end our epic tour.