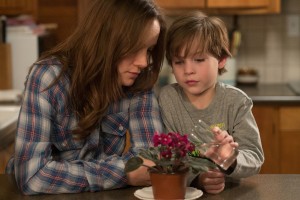 In Lenny Abrahamson’s tonally perfect adaptation of Emma Donoghue’s novel, Room (smartly scripted by the novelist herself), a young mother (Brie Larson) imprisoned in a backyard shed by a sexual predator since she was 17 creates an elaborate imaginary world for her 5-year-old son, Jack (Jacob Tremblay), to inhabit in order to shield him from the true horrors of their lonely existence (seriously…thank god they had TV…it was their only connection to the outside world).  But eventually she comes to a breaking point, and she must shatter her little boy’s world in order to convince him to agree to a scheme for them to break out into freedom.

Apart from the subversive reprieve for the lasting power of television in a smart-phone and social media obsessed world, Room is stacked with all the right moves crafted to push all the right emotional buttons.  The escape plan is truly harrowing and daring, and Abrahamson films it in a way to build up genuine suspense – the shots, editing, music and acting are all top grade.  He’s aided greatly by the savvy music score from Stephen Rennicks who knows when to go ambient minimalist and when to soar at all the right moments.

In Larson, Abrahamson (helmer of the criminally under-seen Fassbender oddity, Frank) found the perfect leading lady – her girl-next-door charms and casual good looks make you believe her character, and her amazing range of emotions allow you to truly feel her complete arc.  In this film she fulfills the promise of great things to come when she first dazzled similarly in the more nuanced Short Term 12. Meanwhile, I don’t know if they could’ve found a more perfect child actor than Tremblay to lead us through the story in all of its shades of child’s fantasy, grim reality and ultimate hope.  He’s a little bit odd, a lot precocious and hits all his marks with eerie precision as we’re treated to an otherwise by-the-numbers trauma resolution.  It makes you wonder what kind of “game” the filmmakers had to concoct for the kid to play be able to show this kind of naturalism.  You really feel like they pulled the kid right out from one of those rooms.

The film also benefits (that might not be the right word) from the real-life cases that echoed Donoghue’s fiction shortly after it was written.  The story on the surface sounds unbelievable until your realize just how believable it is.  The depths of human nature continue to plumb strange psychologies and the film does a therapy-101 style job exploring both the relationships between the abused and their captor, and a co-dependent parent and wise-beyond-their-years child.

Yet despite the depravity they faced, the mother and son survive (and we are made to believe, after a few hiccups…thrive in the outside world).  The emotional resolution seems too easy.  But maybe the kid was just that strong.

Click here to check out my wife’s thoughts and comparison of the book (which I did not read, but she did) and the film.