It Takes a Village in Spotlight 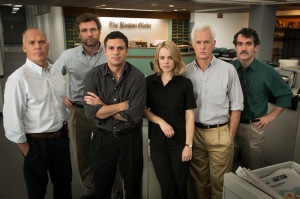 At one point in Tom McCarthy’s deftly handled expose on the exhaustive investigative journalism done by the Boston Globe to uncover the labyrinthine and monolithic Catholic Church sex abuse scandal in 2002, a character coldly observes, “If it takes a village to raise a child, it also takes a village to abuse one.”  Logically it then follows, that it would also take a village to shine a light on corruption.

There’s another great line uttered by Liev Schreiber (who shrewdly plays the Jewish city-hopping editor who turns the Spotlight team onto the case) at the dawn of the story going public where he says something to the effect of, “When we’re fumbling around in the dark and you finally get to shine a light on something, it’s easy to find blame in your own fumbling.”  The journalists in Spotlight (all former or current Catholics) are riddled with the guilt the Church (and life) drill into you, knowing that something should’ve been done earlier, and the film is filled with these types of keen insights and great lines without ever becoming didactic.

It’s funny to think that writer/director Tom McCarthy (of the excellent Station Agent and Win Win…and the overly didactic The Visitor) had to tackle a direct to VOD Adam Sandler film (The Cobbler) before coming out of the darkness and into the light to deliver his first grand slam.  Heavily influenced by All the President’s Men and Sidney Lumet’s The Verdict, he directs the film coolly and cleanly with just enough emotion and chutzpah bubbling up underneath to make this otherwise quiet cry against gross injustice shout loud and clear.

Crisp editing by Tom McArdle volleys the riveting procedural elements between characters, bouncing back and forth with clear-headedness as each facet of the story and corruption is revealed.  There are snippets here and there (an elderly priest who hints at even farther reaching depravity, a former monk turned psychotherapist whose 30 year-long research shocks with the scope of the disorder) that perversely fascinate, while others judiciously display the varying shades of denial, grief and anger of the victims.  It’s astounding work that appears seamless and makes the film’s 2-hour plus run-time fly by.

The cast, meanwhile, is a marvel of character acting.  John Slattery and Stanley Tucci are particularly finely tuned, while Michael Keaton does the best “Boston accent trying not to be a stereotypical Boston accent” yet to be captured on film.  And though his character has the best arc, it’s Mark Ruffalo as Mike Rezendes who most loudly echo’s his director’s grand slam.  He spends most of the film rallying against a near Kafka-esque bureaucracy to get previously sealed court documents released, and the scene where he shouts at Keaton’s pensive pause to publish (after finally getting the damning documents released) is one of grand catharsis for the audience.  Apparently Ruffalo asked the real Rezendes to yell at someone so he could truly feel the frustration, and both in life and on-screen they nailed it.

And they got their story published.

Oh, and Cardinal Law (formerly of the Boston Arch-diocese) who thoughtfully and craftily orchestrated the diabolical cover-up to protect his precious holy empire, apparently was relocated to a posh seat of power in Rome where he has now retired in luxury.

If you would like to contact the current Pope and politely ask him to remove and excommunicate dear Cardinal Law, please visit this link to contact The Vatican:  http://vatican.com/contact or send a beautifully hand-written letter to: