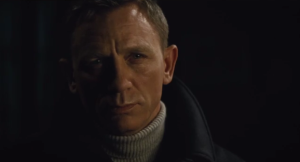 Is it just me or does Daniel Craig, with each passing Bond film, look more and more like the William Shatner mask worn by Michael Myers in Halloween?  For me, the biggest problem with the Craig Bond Era has been Craig…he showed a promising range initially but was never quite right for the role.  But I digress.  He does fine here (I guess) in his fourth outing.  So apart from Craig saddled with being Craig and a snooze-inducing Sam Smith Bond theme (man, what a step down from Adele who knocked it out of the park with Skyfall!), let’s inspect all the good stuff in Spectre…because, boy, there’s a lot of it. (SPOILERS AHEAD)

Oh, oh, can we start with that Mexico City on the Day of the Dead set opening sequence with that amazing helicopter stunt?

Or what about the beautifully night-lit car chase through Rome?

Or what about that sequence in the Austrian alps where a small plane chases a car through a lodge?

Or how about that film’s closing sequence where Bond and his Lady get in a speedboat and chase the villain (Christophe Waltz – perfect)…in…you guessed it…another helicopter down the Thames?

Yeah, what about ALL THAT?  And there’s some great hand-to-hand/shoot-out stuff on a train and some diabolically overly elaborate deathtrap stuff in a villain’s secret hideout in the desert.

And there’s a pretty rockin’ Bond girl (the feisty and voluminous French actress Lea Seydoux – who arthouse patrons will get a special kick out of seeing in this type of role) who takes the better part of one of those classic Bond lines (that produced welcome laughs in the theater) when upon dispatching of a particularly nasty henchman on the aforementioned train, turns to Bond, breathless and says, “What do we do now?” – followed with an immediate quick cut to that proverbial role in the hay.  Hey…it’s a Bond film, people…love it or leave it.

Director Sam Mendes, with his impeccable taste in stately Mad Men-esque set designs (that stuff in the dining car of the train looked like it came off the set of his Revolutionary Road), location shooting, and crisp, clean, “I’m gonna show you all of it!” action sequences masterfully balances the artsy brooding of the earlier Craig Era films (of which he created the pinnacle with Skyfall) with some of the sillier over-the-top stuff that old-school Bond fans crave.  And while he might not have the world’s greatest living cinematographer (Roger Deakins, who was rightfully Oscar nominated for is outstanding work on Skyfall) in his employ this time around (get over it, critics….waaaa….the cinematography god can’t touch every film!), he still did get a top-tier cinematographer in Hoyt van Hoytema (of Her and Interstellar fame) and together the two do a fine, fine job with all the globetrotting and stunts.

The parade of screenwriters (seriously, how man people does it take to write a Bond script?) also do a commendable committee job of tying in every major event from the previous Craig Era films in revealing that Ian Fleming’s infamous Spectre organization and one man (Waltz) has been behind it all along (I knew it! As soon as that behind-the-scenes legal wrangling was concluded this would be the case).  And let me tell you, I’ve never been as excited to see a fluffy, white cat on screen as I was when a certain fan favorite kitty made a most devilish appearance in an evil lab – confirming what we had been suspecting all along…Blofeld is in da house, yo!

Bottom line: there’s no deconstruction and reconstructing here.  Lest you forget, this is the product Mendes promised at the end of Skyfall when M, Q and Moneypenny fell into place.  All we needed next was the perfect foil for our hero…Blofeld.  And we got him.  Spectre is straight-up Bond…shaken not stirred…and worth every penny.