Reverence for The Revenant 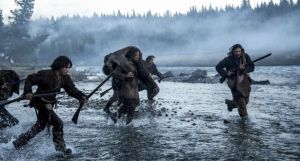 Oh, how I wish I could have gone into The Revenant completely cold, knowing nothing other than it was Inarritu and DiCaprio.  Curiously the film suffers from following an amazing, shrewdly edited trailer that promised uncompromised tension as DiCaprio fights for survival across dreadfully gorgeous cinemascope-worthy mountainous winter landscapes photographed in otherworldly fashion by the king of pretty “sunlight through trees” cinematography Emmanuel Lubezki.  What if I hadn’t known that epic bear attack was coming?  What if I hadn’t known Tom Hardy was going to murder (wait, does everyone know this yet?).  What if…what if…what a shock the film would’ve been had I not already known its moves.

Bu the trailer and its subsequent building buzz hit perfectly on everything:

Despite being in awe of the craftsmanship and audacity of its scope, watching the film seemed stripped of any suspense.  You feel like you’re going through the motions even though it’s utterly captivating from a visual sense.  There was also reliance on spiritual/dream/divination stuff to get inside DiCaprio’s head (and provide his character a heart and soul) that became distracting in relation to the rest of the film’s unrelenting grittiness.  I didn’t find the notion of justice being in the hand of the divine of any comfort in the context of Man and Nature equally eager to kill you.

Yet, is any of this the film’s fault, or is it mine…is it the baggage I bring to it?  I can’t fault Inarritu who completely reinvents himself…again…after reinventing himself with Birdman last year.  The performances (especially DiCaprio’s) are all fascinating from a craft perspective.  And there were moments in the film I absolutely loved – especially when he and Lubezki chose to show horrific things happening in the far-off distance (like wolves taking down a buffalo, or an avalanche) that cause our protagonist to stop and watch while trekking through the wilderness only to move on when realizing the danger won’t touch him (at least not this time).  The sound design was amazing (especially in the aforementioned scenes), and the little bits of back-story added to peripheral characters (like the marauding Pawnee chief motivated by finding his kidnapped daughter) added color to the tale.  But man, what a little bit of dark humor could’ve done to break the monotony.

Even more successful than the film’s marketing push before release has been its carefully crafted awards’ push after.  The night after I watched it, the director, star, and film all took home Golden Globes.  It might now be the frontrunner for the Oscar for Best Picture, and for the first time in Inarritu’s career, he has a box office hit (proving that the right star power can power an art film to mainstream acceptance).  Inarritu is experiencing an embarrassment of riches and success, and hell, the guy deserves it.  I wouldn’t begrudge him.  But it’s not his best, although it’s arguably his most dangerous and daring…from the size of the budget to the scope of the production.

The Revenant is unmerciful.  It’s haunting.  Bleak.  Beautiful.  But it’s ultimately a film to admire and revere more than enjoy.  As such, it left me oddly cold.  But dang, guys, c’mon…give Leo that Oscar…he’s back-scratching, throat-ripping great in this!  And here’s hoping Inarritu continues to reinvent himself.