Coming Through Slaughter and the Evolution of Michael Ondaatje

Above: the only picture of Buddy Bolden (top, second from the left)

Coming Through Slaughter, a piece of poetic historical fiction that attempts to channel the mysterious genius and insanity of jazz trumpeter Buddy Bolden, was Michael Ondaatje’s first novel (published in 1976) though one must use the term novel loosely. I had the pleasure of seeing Michael Ondaatje speak at the Free Library of Philadelphia this month, and he touched briefly on Coming Through Slaughter, and how it was a bridge between his earlier poetry and his later more refined (though still free flowing and organic) novels.

Along with Toni Morrison, Michael Ondaatje is probably my favorite living novelist. Coming Through Slaughter shares some stylistic and thematic traits with Morrison’s 1992 masterpiece Jazz (one of my favorite novels of all time). Both attempt to lyrically copy the cadence and spirit of the music in written form, but while Morrison’s work features many voices riffing on each other, Ondaatje’s is a singular voice that goes on a solo performance into madness. Morrison’s novel is slinkier, like forgotten notes from a dozen songs cat-pawing through a moonlit room whispering their spooky secrets. Ondaatje’s type of jazz is more gritty, virulent, like an unending trumpet blast ear-worming into the sweatiest, dirtiest, darkest spaces.

The cacophony of voices Morrison employs in Jazz is the same style Ondaatje spoke about evolving into after Coming Through Slaughter. His masterpieces In the Skin of a Lion and The English Patient are built on poetic riffing between varied voices that bump into each other unmoored like ships in a darkened harbor. His later works (The Cat’s Table and Warlight) evolve this even further, both using a “younger” and “older” voice from their central characters…the wonder of a youth looking into events, and the ponderous nature of that same character as an adult starting back at them.

Coming Through Slaughter is not a book for everyone. It’s experimental, and though slim, at times a grueling read. Ondaatje’s vivid descriptions of people, places, and feelings can range from the transportive (the barber shop jumps to life off the page), to the bizarre (his humanist depiction of the Storyville photographer Bellocq), to the haunting (Bolden’s love of Nora and his fear for his children), to the monstrously grim (the tattered lives and deaths of New Orleans prostitutes). I sometimes found myself horrified or cringing. It’s a fascinating read, though, for literary jazz connoisseurs and Ondaatje fans. Anil’s Ghost now remains the only Ondaatje I’ve yet to read, and I’m looking forward to crossing it off the bucket list later this year.

After the speaking engagement, Ondaatje (who couldn’t be a more agreeable, charming, soft-spoken, down-to-earth kind of guy) signed copies of Warlight for my wife and I, and a copy of The English Patient for our infant son. When my wife told him he was signing it for our baby, he gave a wonderful little side-story (a jazzy riff, if you will) about a pregnant woman who came to a signing and told him, when asked, that she was naming her child Wren…a name that stuck with him and he later used for a character in Warlight. The same fan showed up at another signing recently, and when she asked him to sign one copy for her child, Wren, and that she had seen him before, the lightbulb went off and he exclaimed, “You’re Wren!”

I’ll be the first to let you know if our son’s name shows up in his next novel, which he says he isn’t working on anything right now, but based on a joke he told about only needing “a place and a time” to start a new work, may or may not be set in Gibraltar in the 1450’s. 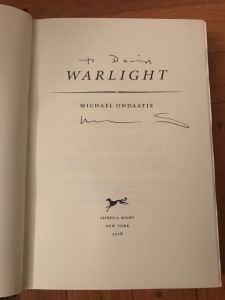 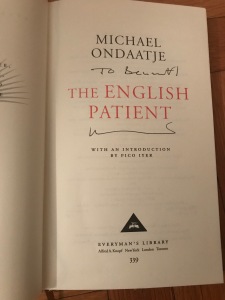