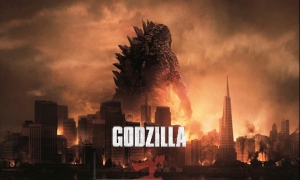 I grew up watching Toho’s many incarnations of Godzilla.  I loved Godzilla – especially the 1989 Godzilla: Monster of Monsters Nintendo video game.  I loved all of the films too, from the iconic 1954 Gojira original to the ridiculousness of “Baby Godzilla” blowing bubbles to the overly melodramatic Godzilla 1985 to the righteously badass Marv Newland animated student film Bambi Meets Godzilla (for the love of god, Youtube it) – still my favorite in the canon, and in that one we only ever see the monster’s foot, so quit your whining about his 2014 screen time!  Because of its Japanese origins stemming from real nuclear horrors, it was an inherently silly franchise that somehow always carried some weight, or the illusion of weight…as if it was far more serious or important than it really was.  Also our fond memories of watching it as children fogged the reality of its natural stupidity.  For some ungodly reason, fans still reeling from the rape of Godzilla in 1998 placed insanely lofty expectations on this latest film incarnation thinking that this Godzilla had to be something more – it had to match our fantasies…it had to be everything we ever dreamed of.

In steps Gareth Edwards, indie director of the silly emo but shockingly effective character drama, Monsters, that had two unlikely people falling in love while trying to get out of Mexico – a Mexico that just happened to be under quarantine due to some rampaging giant walking…squids?  It was a fun little genre mash-up.  END_OF_DOCUMENT_TOKEN_TO_BE_REPLACED