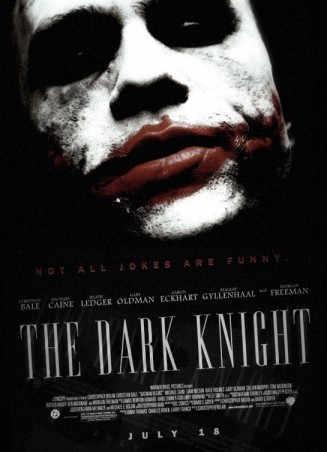 Director Christopher Nolan has tapped into a cultural zeitgeist with his soaring Dark Knight.  No other director has shown so much ambition while working within the context of such an iconic name brand belonging to popular culture. By building upon the excellent framework he set with Batman Begins and adding in the chaos of the Joker (Heath Ledger, legendary) and the tragedy of Harvey Dent (Aaron Eckhart, admirable), Nolan, like Hitchcock before him, utilizes a B-level genre flick to tap into our shared cultural fears. Along with his co-writer brother, Jonathan Nolan, the director crafts a tightly wound tapestry that explores our archetypal fears of losing our identity and becoming that which we hate, while tuning into post 9/11 fears of terrorism, cowboy diplomacy, wire-tapping, and vigilante justice run amok.

The cast assembled falls right into place with Nolan’s epic and relentlessly dark vision of our current superhero mythology. Michael Caine and Morgan Freeman are again perfect in their supporting roles of wisdom and gadget providers, while Gary Oldman receives a surprising amount of screen time and delivers a sterling Oscar-worthy performance as the tormented Commissioner James Gordon. Replacing the dreadful Katie Holmes, Maggie Gyllenhaal is spry and feisty as assistant DA Rachel Dawes, but still seems out of place in her role. Bale is again brooding and effective as Bruce Wayne, though he gets overshadowed by the sly trickster that is Heath Ledger’s Joker. Ledger is everything he’s been hyped up to be. He’s scary good and his insanely nuanced and subversively humorous performance haunts the film while his character terrorizes Gotham with a feverish intensity that is divinely married to Nolan’s amped up tempo of thrills.

The opening moments of the film fall victim to the typical trappings of a sequel as it tries to reintroduce us to the cast regulars while setting the stage for new conflicts. However, once the Joker starts playing his games, Nolan ratchets up the tension to a nightmarish effect that will leave your pulse pounding for two hours. With each terrorist act of the Joker and ensuing catastrophe, Nolan ups the ante, resulting in a film that is enormously entertaining while also making the obvious bloated runtime seem oppressive and nerve-wracking…almost as if the film is a terrorist attack against the audience…

…and maybe that’s the point. With the opening camera swoop between skyscrapers zeroing in on a single window taken straight from Hitchcock’s opening shot from Psycho, Nolan tells the audience what they are in store for. Two more images, along with Ledger’s ghastly scarred and make-up covered visage, seep into the viewer’s subconscious. The first is after a building is exploded we see an image of firefighters spraying water over the scalding steel left behind that is eerily reminiscent of scenes from Ground Zero. The second is after a hospital is demolished, an image of the building’s carcass on the television seems taken straight from the Oklahoma City Bombing. As we watch the harrowing Joker-less climax involving Batman, Dent, and Gordon, and knowing in the back of our minds what became of Ledger in real life, we realize that terrorism can not only come from without, but from within. Sometimes we are our own worst victims.

Check out my review of the original Batman Begins: