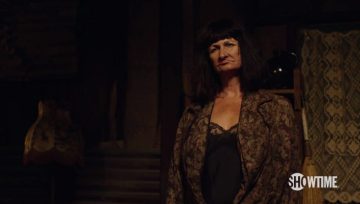 NOTE TO READERS – These weekly posts are meant to recap what happened (SPOILERS AHEAD) and provide conversation starters for fans to comment and share theories.  Do not read if you have not watched this week’s hour(s) yet.

HOURS ONE and TWO

“The Stars Turn and a Time Presents Itself”

The Log Lady (Catherine Coulson) states this rather matter-of-factly to Deputy Chief Hawk (Michael Horse), part of message for him to go find out in the woods that which has been missing…

Most of the premiere had a tense, occasionally obtuse, and brooding vibe – somewhere between the madness of Fire Walk with Me and the tone of Mulholland Drive. Three main story-lines (along with plenty other tangled threads) were set up for some vast cosmic and physical convergence: Agent Cooper being trapped in the Red Room (for 25 years!); an evil doppelgänger Cooper running amuck in the real-world whose days are numbered and is wanted back at the Black Lodge; and some key players in our beloved hometown gearing up for something.

The two hours both inch along and somehow fly by thanks to Lynch’s uncanny knack to make you feel as uncomfortable as hell knowing that at any moment a long, static shot with stilted actors doing not much of anything could turn into an absurd experimental horror show (witness the truly ghastly special-effects that harken back to Lynch’s art school days in Philadelphia and Eraserhead). I wanted some scenes to end so badly, while at the same time I didn’t want the experience to end. END_OF_DOCUMENT_TOKEN_TO_BE_REPLACED 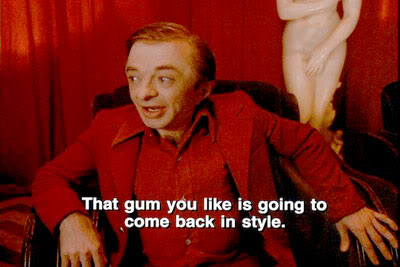 While the midget (later learned to be Mike’s arm) prattled on about polymer oral treats, twas the girl who looked almost exactly like Laura Palmer who told Agent Cooper in the Red Room who killed Laura Palmer…but as all Twin Peakers know…that was 25 years later. After the series finale, were we to believe Agent Cooper (and/or his doppelgänger?) would be trapped in the Black Lodge all that time until the gum he liked was going to come back in style?

Apparently I wasn’t the only one who thought it would be the cat’s pajamas if David Lynch and Mark Frost would indeed take us back to Twin Peaks 25 years later to see how Coop and Annie and all our friends were doing. Well…it’s been 23 years since we first visited Twin Peaks, which means they have 2 years to get their act together – and naturally rumors abound with Lynch allegedly thinking about returning to TV (hell, isn’t playing Gus the bartender on The Cleveland Show enough for him?) and Frost reminding people how he and David always imagined Twin Peaks as a continuing story. Meanwhile copy-cat shows continue with The Killing still killing on AMC, Bates Motel scaring up viewers on A&E and Netflix attempting to get people hooked on Hemlock Grove.

Thankfully, a new viral campaign to Bring Twin Peaks Back to TV has started over there on the Facebook and apart from the standard fan art, nostalgia, pining and petition signing, they’ve come up with a mondo clever Agent Cooper MISSING Poster Campaign where fans all over the world have been plastering posters every place they can and posting the photographs online.