The Top Ten Will Ferrell Movies

This December, the most anticipated “long-awaited” sequel in film history since The Godfather Part III, will finally be here. 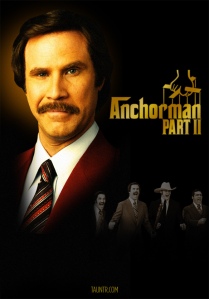 In honor of Anchorman 2’s upcoming release, I invite my idiot and learned readers alike to name their favorite films from uber-funny and 21st-century absurdist satirical mastermind, Will Ferrell.

All the rest are crap.  Now name your Ferrell picks in the comments field.

P.S. Who else is super stoked about IFC’s upcoming “mini-series event” – a Ferrell produced adaptation of Eric Jonrosh’s The Spoils of Babylon?