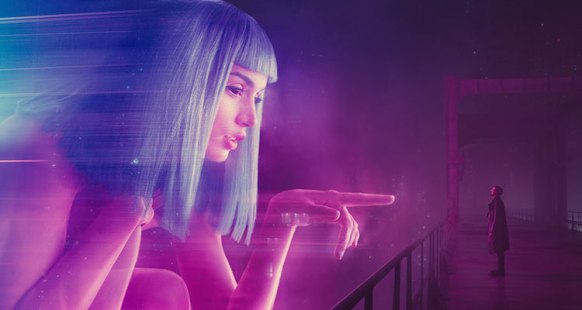 If one is to believe the declaration of a doctor (Carla Juri) who specializes in fabricating human memories for implantation into replicants earlier in the film… that there’s a little bit of the artist in each one…then one might draw the conclusion that replicant mentioned above is speaking for none other than director Denis Villeneuve.  He’s operating on a well-known (and much copied) property in this “30 years later” update of Ridley Scott’s classic neo-noir sci-fi…but he’s very much put his own stamp on it.  There’s also a bit of “killing your darlings” in his daring showmanship, symbolically murdering his forefather Scott along with his oft-compared contemporaries David Fincher and Christopher Nolan.  Yes, Denis…you are the best one.

But there’s more subtext (and context) than just “the mark of the artist” in Blade Runner 2049…there’s also philosophical pondering on artificial intelligence, slavery, and what it means to be human.  Meanwhile, on the surface, the film tick-tock’s through the motions of your traditional noir detective story.

Our detective (Ryan Gosling) uncovers some bones that point to a grand conspiracy, his girlfriend with a heart-of-gold yearns to help, his boss gives him hell, and he gets plenty roughed up the deeper into the mystery he gets.  But all those elements are twisted in wickedly creative or subversive ways.  The detective is a replicant.  The conspiracy points to the creator (Jared Leto) behind the corporation that produces all the replicants.  The girlfriend with a heart-of-gold is a mass-produced holographic operating system (Ana de Armas) designed to please.  The boss is Robin Wright, who I’m still not sure if she was human or not…and if so, may have been the only actual human in the entire movie.  And some of that roughing up comes from none other than Deckard (Harrison Ford) from the original film.

By continuing with the mythos of the original film that in 1982 imagined a bleak future in 2019 (with anachronistic references to the continuation of everything from the Soviet Union to Atari), an eerie sense of both a dark past (the 1982 version of next year) and a darker future (in 2049) converge, making the viewer constantly unnerved to be amidst this bizarre alternate reality futurism.  The film’s languid pace chugs along in both mesmerizingly weird and ho-hum ways, so much so, that by the time the fantastic old-fashioned serial-cliffhanger denouement takes shape, it’s a complete and devilishly delightful surprise.

Villenueve, in addition to the game cast eager to please under his crafty direction, assembles a dream team to weave his dream across the flickering screen.  Roger Deakins cinematography casts ghoulish hues across a rain-soaked and radiating futuristic landscape, with so many haunting images captured within Villenueve’s exacting framing, it’s impossible to name a favorite (though the water-reflecting surfaces of Jared Leto’s lair are certainly near the top…along with the Los Angeles streets suffocated by purple rain and populated by giant holographic female advertisements).  The sound design is populated with mechanical and digital scratching and skipping , giving voice to a world constantly teetering between replicating a recording of the past and complete black-out from failing technology.  The enthralling musical score (from Benjamin Wallfisch and Hans Zimmer) merges with this cacophanous sound design, creating a gothic brooding that stirs your mind as much as your gut.  And naturally, the immersive set designs and special effects look every bit of their monumental budget.

But what does this all mean?  (Oh, and yes, there is that signature Villeneuve twist, that I honestly didn’t put together until the very end…not until the very moment that I imagine Villenueve wanted me to connect that last piece of the puzzle).  Well, on the heels of Sicario and Arrival, Blade Runner 2049 solidifies Villenueve’s status as one the greatest living film directors.  Heck, maybe he’s even “the best one.”  Just as Gosling’s detective cries out in existential crisis, “I know what’s real!”, we can rest assured, in the fantasia of cinema, Villenueve is the real deal.

Replicating the spin from across the interwebs…