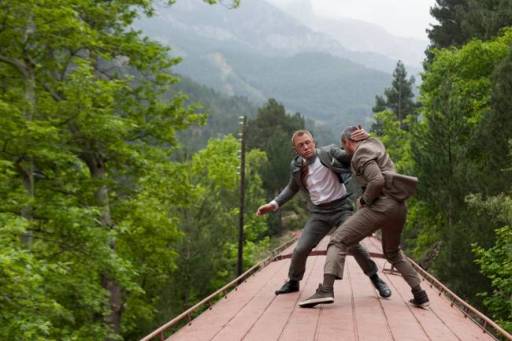 The third Daniel Craig headlining Bond flick, Skyfall, opens up like many Bond films of yore with a spectacular chase sequence that involves motorcycles atop Istanbul’s famous market and a fist-fight atop a moving train that ends with Bond getting accidentally shot by another agent trying to take out his combatant.  And as he falls into the river below, the traditional Bond credit sequence begins with Adele’s superb theme song recalling Shirley Bassey’s iconic Goldfinger.

It seems we were in for more of the same, but did they just kill Bond…even if only symbolically?  During the credits you are reminded of the masterstroke of hiring cinematographer Roger Deakins (arguably the best in the biz today) and his frequent cohort, Oscar-winning director Sam Mendes as their names come up in that comfortably familiar Bond credit sequence font.  Never before has a Bond film been given such behind-the-scenes pedigree, and armed with a sharper than normal script – the dynamic duo pay homage, deconstruct, and resurrect from one amazing set piece to the next the entire Bond oeuvre.

It’s as if Mendes (a Brit, lest we forget and so obviously a Bond fan) decided to give buddy Deakins carte-blanch to create pure unadulterated cinematography fantasia with each passing set piece.  Witness the lighting in the Shanghai sequence that culminates with a silhouetted hand-to-hand combat against skyscraper glass walls overlooking a night sky lit up by revolving electronic advertisements projected onto the building’s exterior.  There’s a delirious Macau sequence full of color and darkness and one smoking-hot exotic Bond girl (Berenice Marlohe) that’s followed up by the big-villain-reveal on a crumbling fortressed island where Mendes in his delirium manages to fit in an homage to an obscure French film, Toto the Hero (which also influenced the floating bag in his American Beauty) with his choice of song during a deranged target-shooting sequence.  The villain here is played with insane deadpan gusto by Javier Bardem, and he ranks amongst the greatest of Bond villains, if not the oddest.

There is a plot, of course, where Bardem’s villain is targeting M (Judi Dench – receiving her most screen time ever during her long tenure with the Bond franchise).  Eventually the action moves to a Scottish manor where not only the plot but also the cinematography technique has gone full tilt gothic.  Here themes of orphaned children, cruel “stepmothers”, bad seeds and returning to one’s roots are played against a grand cinematic canvas of encroaching darkness and bombastic flames.

I mean seriously…when has a Bond film ever been able to be deconstructed on a symbolic level?  In a weird counter-intuitive way, Mendes and Deakins have completed perhaps the first ever reverse reboot.  Symbolically they “kill” what we all know and love, resurrect it, dress it up in the fashionable psychological complexities of the day (ala Nolan’s Batman films) only to literally burn that idea to the ground…and lo and behold…all of our familiar players (Bond, M, Q and Moneypenny) are returned to their cozy confines ready for future action.

So let’s get off all that jazz and bottom-line this slick puppy – Skyfall is by far the best Bond film of the Brosnan-Craig era and is armed with a great villain in Bardem and top-line supporting cast (including Ralph Fiennes, Albert Finney, Naomie Harris and Ben Wishaw).  There are scenes that should’ve been tighter or cut and overall the film is bogged down by an unnecessarily bloated run-time.  However, you won’t mind because this is the best-looking and most creatively shot Bond film – perhaps ever.  All in all, Skyfall is the tops.

And Mendes and Deakins…it makes you wonder if there was a top-secret deal for them to do more if this one sticks?  Frankly, during Bardem’s gleefully sarcastic death sequence, I had another “outside-of-the-box” idea.  How about Mendes and Deakins team up for a new cinematic incarnation of Dracula…starring in the lead role…you guessed it…Javier Bardem.  Now that would be something they could really sink their teeth into.

Leave a Reply to The Life of Pi, Rust and Bone, The Other Son and The Man in the White Suit on Monday Morning Diary (November 25) « Wonders in the Dark Cancel reply