It’s official, when it comes to the music on my iPhone, “L” is the best letter of the alphabet. 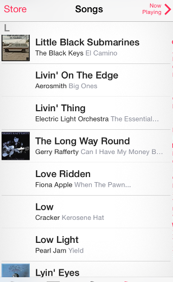 Not only do three of my favorite songs EVER (the Goodfella‘s inspiring Derek & the Dominos version of “Layla”, Dylan’s “Like a Rolling Stone” and The Eagles “Lyin’ Eyes”) begin with the letter “L”, but my “L’s” are also a completely stress-reducing mix of weirdly juxtaposed but oddly complimentary tracks that make any traffic jam, jam.  It also makes me realize I am very, very tragically white.

Naturally, I had to include “Layla” here:

The music video for Cracker’s “Low” with Sandra Bernhard is also still pretty damn good after all the years, dontcha think?

So what’s your favorite letter of the alphabet in your music collection?  Share you lists in the comments field!